Posted by tim petterson on

Next week at Crown Melbourne staff will enjoy the third pay increase of our 2013 union EA.

Union members and delegates are taking this opportunity to remind members and non-members how these pay increases were won.

And a full-time two-game dealer with eight years’ service has seen their pay rise from $54k in 2012 to almost $67k, due to wage rises and a reclassification, also won in our 2013 union EA.

“To all the non-members, the pay rises you’ve enjoyed each year are not a gift from Crown,” said Praveen Chandola, an F&B delegate.

“Union members like me fought hard for that pay rise."

"This is last pay rise of our current EA, and there won’t be another one unless we make our union stronger.”

“The best way to say thanks is by joining our union.” 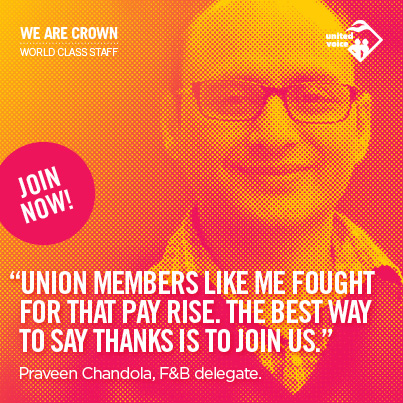 “I was in that campaign. I saw how hard it was to push Crown management forward,” he said.

“If it wasn’t for the strength of our member base – the negotiating team wouldn’t have had a leg to stand on.”

“The power to win decent pay and fair working conditions at Crown comes down to how many members we have.It’s that simple,” she said.

“So if you like the idea of winning a great EA next year, I’d encourage you to join now."

"Don’t thank me for this pay rise – just join.”

Join your union now - for better, safer jobs at Crown.